Call it an epiphany. When I heard my grade school’s Suzuki violin program give a concert in my first-grade classroom, I knew I’d found my instrument

After the concert, I went home and bugged my parents to please, please, please let me play the violin. And after working on them for months, they relented. I got a rental violin from a downtown music store and was enrolled in Oakwood Elementary’s Suzuki program.

I didn’t realize it at the time, but I lucked out. My first teacher, Helen Loing, not only taught me the fundamentals of violin playing, she showed me by her example how to teach: with patient persistence and lots of encouragement.

While I was learning Bach, Vivaldi and Schumann at Oakwood Elementary, I started exploring other styles of music on my own time.

My grandpa, a fiddle and mandolin player, introduced me to country fiddling, and encouraged me to take up the mandolin.

Meanwhile, the kids I skateboarded with introduced me to punk rock and to the Twin Cities underground music scene, where two local bands called Husker Du and the Replacements were just beginning to get national attention.

After I discovered that the violin could be plugged into an amplifier, soon I was playing with rock and alternative country bands in local clubs.

During the day, I’d walk around with an “X” written in fading Sharpie on my right hand, where the club management marked me so bartenders would know not to serve the kid with the fiddle. At night, I learned my trade as a working musician, eventually performing, recording and touring with dozens of bands, including some of my musical heroes. 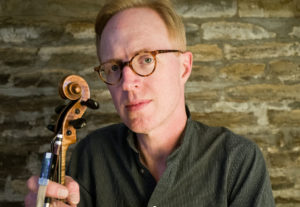 By the 2000s, I decided to focus exclusively on playing traditional bluegrass. After a stint touring with the Grammy-nominated bluegrass singer James King, I co-founded my current band The High 48s, who went on to record seven albums (and counting) and join the ranks of such bluegrass luminaries as the Steep Canyon rangers by taking first place in the prestigious RockyGrass Bluegrass Competition.

While keeping up a busy performance schedule with The High 48s, I opened my teaching studio in Saint Paul and began giving bluegrass fiddle workshops at festivals and jam camps around the country.

My teaching method owes a lot to my first teacher’s patient, persistent approach. My goal is to give all my students the same foundation of technique and encouragement that she gave me, so they can follow their passion for music wherever it takes them.